The Question of Civilization 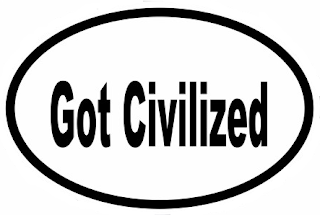 Originally posted at the Hampton Institute


Civilized. It is a word that has come to mean cultural norms, the manner in which governments rule, and how people act in our interactions with one another. However, there are levels within our civilization and it is interesting to see how some groups and people are included in this idea while others are excluded and ignored.

When regarding ideas of what is civilized, it usually turns into discussions of white culture and how whites are superior to every other ethnicity. European-based ideas of what art, music, and literature are consistently touted in society as being of the highest quality. One only needs to look at what the US considers classical literature and they will see that the overwhelming amount of work is by white men, as are all the movies and art. A counterargument to this may be that the majority of the people at the time were white, thus what was one to expect? Yet, this does not stand as times change and with it so do our views of what is important and what is not. While some may cite that there are entire studies based solely on minority groups, this still ignores the fact that white culture is still viewed today as superior to all others and that view is consistently reinforced in our society. To this day, we still see that the white male dominated arts is considered American classics and part of ‘civilized’ culture whereas the likes of James Baldwin is left out.

However, it is not just in the arts where groups of people are left out, but in everyday dialogue. Minorities, especially black people, are viewed as ‘uncivilized,’ from our music, which has been accused of contributing to violence[1], to our hairstyles which have been portrayed as barbaric in some instances.[2] This consistent view of non-European people as an ‘other’ and as being uncivilized results in stereotypes that have very real consequences, such as not feeling the need to learn about other cultures. For example, “if a person believes all Arab Americans are terrorists, that person need not learn anything more about Arab culture or people.”[3] Besides contributing to ignorance, it allows for the horrors that were perpetuated by white Americans, such as the genocide of Native Americans, slavery, and the internment of Japanese-Americans is mentioned, however those past transgressions are largely ignored as they are not spoken of often, rather being largely eclipsed by discussions praising white culture.

While it is rather obvious that the frequent praise of whites as being the leading figures in American culture ignores minorities, such admiration also harms whites as they hold these ideas as being the standard and are reluctant to seek out and explore other cultures and groups that are different from their own. A potential result of such reluctance is to have a rather narrow view of the world, such as white Americans believing that they are victims of reverse racism, despite the fact that “statistically, African-Americans have far less opportunities handed to them, they generate less income than white Americans, own less homes, and have a much higher chance of living in poverty than non-black Americans.”[4] Programs such as affirmative action are often cited, however, the fact is that white women are the biggest beneficiaries of affirmative action, not racial minorities as “study after study shows that affirmative action helps white women as much or even more than it helps men and women of color.”[5]

Yet, this idea of the white man being superior and the most civilized does not just extend to the United States, but to the world at large. It can easily be found in our language. Just examine the terms ‘Western civilization’ and ‘the Western world.’ When we say these phrases, we are in actuality referring to western Europe, the United States, Canada, and Australia. Such terminology in both everyday language and in history books ignores the cultures and viewpoints of Latin American and indigenous peoples. It effectively erases them and renders them nothing but side characters and extras in the great drama that is the story of humanity.

Such attitudes also carry over the other parts of the world, especially with regards to Africa and the Middle East. With regards to Africa, we still view the entire continent as nothing but lions and jungles for the most part, save South Africa. There is a knowledge that the continent is racked by political, ethnic, and economic turmoil, which often turns into violent conflicts. However, certain facts are ignored, such as that the legacy of colonialism and the continuation of neo-colonialism are major contributors to Africa’s current situation. The neo-colonialism can be seen in the form of the global land grab and its affect on Africans[6] and the intervention of France in the ongoing conflict in Mali.[7] The same goes for the Middle East, where it is, for the most part, viewed as a region of nothing but Islamic religious fanatics that do nothing but fight.

By viewing such regions as ‘uncivilized,’ just as with viewing minorities in the US through a stereotypical lens, one of the effects are that such thinking allows the horrors committed by whites to be ignored. The violent history of colonialism and imperialism on the African and Middle East regions are washed away and the people are blamed for their current predicament rather than acknowledging that the situation is much more complex. We view Africa as a grossly underdeveloped continent where people live in huts, but never ask questions such as these: Which is more uncivilized, living in a hut or committing genocide and cutting off people’s hands to get at the resources near those huts?[8] For the latter is precisely what was done in the Congo by Belgium. The views of ‘uncivilized’ societies are in many cases detached from reality as they ignore other factors, yet it reveals the fact that in order for ‘the west’ to be viewed as superior, it requires a suspension of factoring in the political and economic histories into the overall narrative.

Overall, by focusing solely on whites as being ‘civilized’ it has the effect of not only minimizing other cultures and groups, but delegitimizes them as well. This is dangerous as it allows stereotypes and ignorance to flourish, rather than encouraging inquiry and diversity. In order to actually begin to view the world as it is, rather than through a race-based lens, we need to begin to deconstruct these notions of the ‘superiority’ of ‘western civilization’ in ourselves and those around us, for only then can be start to see the world through a different lens.