The Cruel Irony of Austerity 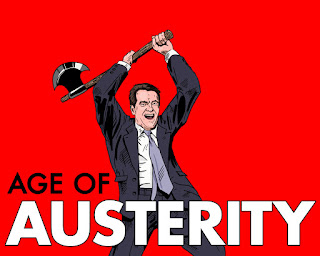 Given the current government shutdown, impending battle over the debt ceiling, and the horrible effects of sequestration, I thought that it would be relevant to publish an article I wrote two years ago in regards to the irony of austerity measures as the issues are still very much with us.

For quite some time now the United States has had a mountain of debt which has grown to the point where it is now unpayable. Only recently, (since Obama came into office and the Tea Party came about) has the federal government been paying attention to its spending rates. The main solution that has been pushed by the Republicans is austerity. Those in power act as if these cuts will suddenly cure all the nation’s economic woes, while ignoring the massive ‘defense’ budget. It seems that our representatives either are not aware of or are ignoring just how inhumane and ironic austerity is.

Recently, Providence, the capital of Rhode Island, sent a message to all of its public teachers telling them that they could potentially be laid off by year’s end. The local government reasoned that it was necessary “because of the dire fiscal straits that both Providence and its school system are in.”[1] This puts the education of many school children at risk. The effects of these cuts will most likely be larger class sizes and a lower quality of education for attendees of public schools

Also, the federal government is planning to cut Pell Grants, which aid many low-income college students in paying for their education. This proposal is actually unfair in that it “hurts Pell Grant funding more severely than other budget items"[2] and the current increase is only to make up for the increases that should have happened during the Bush administration. Due to these Pell Grant cuts and increases in college tuition costs, many low-income college students may very well be forced to drop out.

These cuts are not only inhumane in that they make the suffering of the poor the solution to the current problems, but are also ironic. The right-wing wants to see an economically and militarily strong America, yet how does one expect America to be either when its young are uneducated?

Yet, the most shocking part is that Republicans and the Democrats are not only willing to let other people’s parents and grandparents suffer, but are willing to let the young suffer as well. The people who will suffer the most from an increase in the retirement age is this generation of young people, who will find that they will have to work more and more years just to be eligible for Social Security benefits.

When taking into account the employment situation of those who receive Social Security, the predicament for those affected becomes even more ironic. One proposal virtually forces the elderly to go and find a job in order to be able to support themselves, while the other proposal forces younger people to work for more years. Yet both are going to have to deal with the Great Recession and its main effect: little to no job growth.

What this essentially does is subject both old and young to a meager existence, at the beck and call of corporations who can fire them at any moment, knowing that they (the corporations) have a virtually limitless labor pool to draw from.

Everyone, from the President to the newest House member has been pressing for cuts in Medicare and Medicaid. They say that it is the main problem with our budget and that, just like with all other social programs, we just can’t keep funding them, lest we eventually go bankrupt. According to the latest information, 16% of the population is on Medicare[4] while 21% is on Medicaid.[5] Even if only a small amount of the funding is affected, this will have serious effects as the health care of both seniors and the poor is taken out from under their feet. Once again, as with Social Security, we see the irony in this. Since the poor and elderly will have no health insurance, the only way they’ll be able to get health insurance is by going back to work, yet there are so few jobs available.

With assisting the poor in getting access to food, it seems that in this too, the government has decided that it would be best to cut funding. An article in the Iowa Independent states “The cliff in food stamps means that one month; a family will receive a set amount of money, about $4.50 per person per day. The next month, they will get less.” [6](emphasis added) In good economic conditions, that amount would barely feed a family for a month and this is even truer today, when one looks at rising food costs! It is impossible for anyone to survive on such a meager income. The irony is that this may very well create criminal elements in society where there were none before, as people turn to crime to fill their stomachs. This irony becomes stronger when one considers that there was a 14% increase in the number of food stamp recipients last year.[7]

The most ironic part of austerity measures, though, is how they create a situation where the public is willing to fight back and rally against the destruction of their lives. The elite have a perception that they are invulnerable and that their intelligence is second to none, yet they are unable to realize that the very things they are doing to shore up revenues in the short-term will be their long-term downfall.