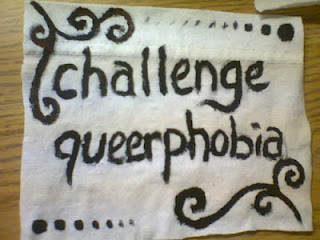 The oppression and problems that LGBT people face on a regular basis is gaining more and more exposure in the news on both a national and international level. Yet, while the main focus seems to be on same-sex marriage, there is also something that is ignored, namely the issue of race in regards to who is and who is not prejudiced against the LGBT community.

Earlier this year, Time Magazine ran a cover in which ran a headline that gay marriage had already won.[1] On the cover were either two gay men or two lesbian women kissing. While this is just a magazine cover, it epitomizes the general American view of lesbians and gays: middle-class, white individuals. It also reveals just how little attention LGBT people of color receive, with our communities consistently being labeled homo- or trans- phobic.

This manner of thinking is quite dangerous on a number of levels. For one, it implies that prejudice against LGBT people specifically lies with people of color when this ignores the fact that 1) there are homophobic white people- just look at the Westboro Baptist Church and 2) there are, in fact, LGBT people of color.

On another level, it implies that white people can’t possibly be anti-LGBT because of their very whiteness. This can be linked to the general idea of white supremacy in America where there are subtle “manifestations of white supremacy that are woven into the fabric of American culture”[2] and white people not being considered anti-LGBT is one of these manifestations in which whites are considered morally superior to people of color.  The fact of the matter is that most anti-LGBT prejudice that whites display is often ignored and paid no notice, with one example being the case of Cece McDonald, in which she was assaulted by white transphobes[3] and received little to no mainstream media coverage.

There are those who may argue that they are correct in painting people of color as anti-LGBT by pointing to certain articles such as Bill Maxwell’s Homophobia: It’s A Black Thing, in which we see a black author stating that “Several studies and polls show that homophobia is a major part of African-American culture, enabled by religious and political nonsense and emotional and intellectual immaturity.”[4] Yet, this ignores that soon after Mr. Maxwell’s article was published, information came out stating that blacks are more likely to identify as LGBT[5], the majority of blacks support same-sex marriage[6], and there are a number of influential LGBT blacks[7]. If this homophobia had been linked to the “religious and political nonsense” and the “emotional and intellectual immaturity” of the black community, how could any of this have happened? It is quite obvious that homophobia is not as prevalent in the black community as Mr. Maxwell had thought.

By buying into the idea that all people of color are anti-LGBT, one is only stereotyping and perpetuating a myth that is completely false and not only allows whites to continue to ignore their own shortcomings in regards to LGBT people, but on a larger scale, ignore the unique challenges that LGBT people of color face.[8]

Rather than quibble about who is more or less prejudiced, it is time that we actually realize that anyone, no matter their skin color, can be prejudiced against LGBT individuals and to fight that prejudice on both an individual and national level, from talking to anti-LGBT individuals we know to fighting for federal and state laws that end discrimination against trans* individuals. Only in that way will we be able to create a society that is more just, not just for LGBT people, but for everyone.

[8] Advocates for Youth, The Impact of Homophobia and Racism on GLBTQ Youth of Color, http://www.advocatesforyouth.org/publications/425?task=view, June 2007
Posted by Devon DB at 7:13 PM