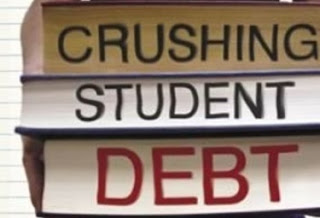 It was reported late last month from Zero Hedge that the student loan delinquency rate had just gone parabolic. This could have major repercussions for banks, students, and the nation as a whole.

This sudden spike in delinquency rates is usually seen before a bubble pops. However, this is a major problem for the US as according to a report done by the Consumer Financial Protection Bureau "American consumers owe more than $150 billion in outstanding private student loan debt." If we take this figure at its face value and do the arithmetic (student loans overall are currently at approximately $1 trillion), then about $850 billion in student loans are federal and thus the US taxpayer is on the hook for them.

Due to low employment for college grads, this spike comes as no surprise. Yet the effects could be quite serious as one is unable to get rid of student loans, even in bankruptcy. So, what do you do when you can't get rid of your student loans, but can't pay them off? They sure as hell aren't going to get a bailout, seeing as how their name isn't Goldman Sachs or Bank of America. Regarding what will happen to student, the current situation remains unclear. The effects on the economy, however, there is a glimpse of the future and it doesn't look good.

The fact that students can't find jobs means that they "are less likely to buy new cars or starter homes or to put new flat-screen TVs on their credit cards. Adding to the distress, unemployment is higher among young Americans than other age groups." This could be a major problem as consumption fuels the US economy and Americans are wary of building up credit card debt, seeing as how "Credit card borrowing fell $2.9 billion, the third decline in four months." So what does this mean for the future? It could mean a future where there is only sluggish growth for the economy, if any at all.

The student debt bubble could also put schools at risk as well.

Related Article: The Crisis of Student Debt In America