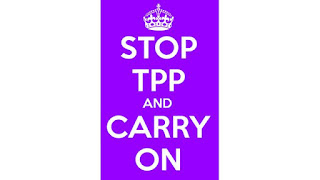 Why So Secretive? The Trans-Pacific Partnership as Global Corporate Coup

See the final part of the TPP series here


The Trans-Pacific Partnership is the most secretive and “least transparent” trade negotiations in history.

Luckily for the populations and societies that will be affected by the agreement, there are public research organizations and alternative media outlets campaigning against it – and they’ve even released several leaks of draft agreement chapters. From these leaks, which are not covered by mainstream corporate-controlled news outlets, we are able to get a better understanding of what the Trans-Pacific Partnership actually encompasses.

For example, public interest groups have been warning that the TPP could result in millions of lost jobs. As a letter from Congress to United States Trade Representative Ron Kirk stated, the TPP “will create binding policies on future Congresses in numerous areas,” including “those related to labor, patent and copyright, land use, food, agriculture and product standards, natural resources, the environment, professional licensing, state-owned enterprises and government procurement policies, as well as financial, healthcare, energy, telecommunications and other service sector regulations.”

In other words, as promised, the TPP goes far beyond “trade.”

Dubbed by many as “NAFTA on steroids” and a “corporate coup,” only two of the TPP’s 26 chapters actually have anything to do with trade. Most of it grants far-reaching new rights and privileges to corporations, specifically related to intellectual property rights (copyright and patent laws), as well as constraints on government regulations.

The leaked documents revealed that the Obama administration “intends to bestow radical new political powers upon multinational corporations,” as Obama and Kirk have emerged as strong advocates “for policies that environmental activists, financial reform advocates and labor unions have long rejected for eroding key protections currently in domestic laws.”

In other words, the already ineffective and mostly toothless environmental, financial, and labor regulations that exist are unacceptable to the Obama administration and the 600 corporations aligned with the TPP who are giving him his orders.

The agreement stipulates that foreign corporations operating in the United States would no longer be subject to domestic U.S. laws regarding protections for the environment, finance or labor rights, and could appeal to an “international tribunal” which would be given the power to overrule American law and impose sanctions on the U.S. for violating the new “rights” of corporations.

The “international tribunal” that would dictate the laws of the countries would be staffed by corporate lawyers acting as “judges,” thus ensuring that cases taken before them have a “fair and balanced” hearing – fairly balanced in favor of corporate rights above anything else.

A public interest coalition known as Citizens Trade Campaign published a draft of the TPP chapter on “investment” revealing information about the “international tribunal” which would allow corporations to directly sue governments that have barriers to “potential profits.”

Arthur Stamoulis, the executive director of Citizens Trade Campaign, explained that the draft texts “clearly contain proposals designed to give transnational corporations special rights that go far beyond those possessed by domestic businesses and American citizens… A proposal that could have such broad effects on environmental, consumer safety and other public interest regulations deserves public scrutiny and debate. It shouldn’t be crafted behind closed doors.”

Public Citizen’s Global Trade Watch, a public interest organization, undertook an analysis of the leaked document on investment and explained that the international corporate tribunal would allow corporations to overturn national laws and regulations or demand enormous sums in compensation, with the tribunal “empowered to order payment of unlimited government Treasury funds to foreign investors over TPP claims.”

Even under NAFTA, over $350 million has been paid by NAFTA-aligned governments to corporations for “barriers” to investment “rights,” including toxic waste dumps, logging rules, as well as bans on various toxic chemicals.

Because let’s be clear: for corporations, such regulations and concerns over health, safety and environmental issues are perceived solely as “barriers” to investment and profit. Thus their “government” would sue the foreign government on behalf of the corporation, on the premise that such regulations led to potential lost profits, for which the corporation should be compensated.

The TPP allows the corporations to directly sue the government in question. All of the TPP member countries, except for Australia, have agreed to adhere to the jurisdiction of this international tribunal, an unelected, anti-democratic and corporate-staffed kangaroo-court with legal authority over at least ten nations and their populations.

Further, TPP countries have not agreed on a set of obligations for corporations to meet in relation to health, labor or environmental standards, and thus a door is opened for corporations to obtain even more rights and privileges to plunder and exploit. Where corporate rights are extended, human and democratic rights are dismantled.

Pharmaceutical corporations are major proponents of these rights and are likely to be among the major beneficiaries of the intellectual property chapter of the TPP. The pharmaceutical industry ensured that strong patent rules were included in the 1995 World Trade Organization agreement, but ultimately felt that those rules did not go far enough.

Dean Baker, writing in the Guardian, explained that stronger patent rules establish “a government-granted monopoly, often as long as 14 years, that prohibits generic competitors from entering a market based on another company’s test results that show a drug to be safe and effective.” Baker noted that such laws are actually “the opposite of free trade” since they “involve increased government intervention in the market” and “restrict competition and lead to higher prices for consumers.”

Essentially, what this means is that in poor countries where more people need access to life-saving drugs, and at cheaper cost, it would be impossible for companies or governments to manufacture and sell cheaper generic brands of successful drugs held by multinational corporate patents. Such an agreement would hand over a monopoly of price-controls to these corporations, allowing them to set the prices as they deem fit, thus making the drugs incredibly expensive and often inaccessible to the people who need them most.

As U.S. Congressman Henry Waxman correctly noted, “In many parts of the world, access to generic drugs means the difference between life and death.”

The TPP is expected to increase such corporate patent rights more than any other agreement in history. Generic drug manufacturers in countries like Vietnam and Malaysia would suffer. So would sales of larger generics manufacturers in the U.S., Canada, and Australia, which supply low-cost drugs to much of the world.

While the United States has given up the right to negotiate drug prices with pharmaceutical corporations (hence the exorbitant price for drugs purchased in the U.S.), countries like New Zealand and even Canada to a lesser extent negotiate drug prices in order to keep the costs down for consumers. The TPP will grant new negotiating privileges to corporations, allowing them to appeal decisions by governments to challenge the high cost of drugs or to go with cheap alternatives. Referring to these changes, the U.S. manager of Doctors Without Borders’ Access to Medicines Campaign stated, “Bush was better than Obama on this.”

But that’s not all the TPP threatens: Internet freedom is also a major target.

The Council of Canadians and OpenMedia, major campaigners for Internet freedom, have warned that the TPP would “criminalize some everyday uses of the Internet,” including music downloads as well as the combining of different media works. OpenMedia warned that the TPP would “force service providers to collect and hand over your private data without privacy safeguards, and give media conglomerates more power to send you fines in the mail, remove online content – including entire websites – and even terminate your access to the Internet.”

Also advanced under the TPP chapter on intellectual property rights, new laws would have to be put in place by governments to regulate Internet usage. OpenMedia further warned that, from the leaked documents on intellectual property rights, “there can be heavy fines for average citizens online,” adding: “you could be fined for clicking on a link, people could be knocked off the Internet and web sites could be locked off.”

The TPP, warned OpenMedia founder Steve Anderson, “will limit innovation and free expression.” Under the TPP, there is no distinction between commercial and non-commercial copyright infringement. Thus, users who download music for personal use would face the same penalties as those who sell pirated music for profit.

Information that is created or shared on social networking sites could have Internet users fined, have their computers seized, their Internet usage terminated, or even get them a jail sentence. The TPP imposes a “three strikes” system for copyright infringement, where three violations would result in the termination of a household’s Internet access.

So, why all the secrecy? Corporate and political decision-makers study public opinion very closely; they know how to manipulate the public based upon what the majority think and believe. When it comes to “free trade” agreements, public opinion has forced negotiators into the darkness of back-room deals and unaccountable secrecy precisely because populations are so overwhelmingly against such agreements.

An opinion poll from 2011 revealed that the American public has – just over the previous few years – moved from “broad opposition” to “overwhelming opposition” toward NAFTA-style trade deals.

A major NBC News-Wall Street Journal poll from September of 2010 revealed that “the impact of trade and outsourcing is one of the only issues on which Americans of different classes, occupations and political persuasions agree,” with 86% saying that outsourcing jobs by U.S. companies to poor countries was “a top cause of our economic woes,” with 69% thinking that “free trade agreements between the United States and other countries cost the U.S. jobs.” Only 17% of Americans in 2010 felt that “free trade agreements” benefit the U.S., compared to 28% in 2007.

Because public opinion is strongly – and increasingly – against “free trade agreements,” secrecy is required in order to prevent the public from even knowing about, let alone actively opposing, agreements like the Trans-Pacific Partnership. And this, as U.S. Trade Representative Kirk explained, is a very “practical” reason for all the secrecy.
Posted by Devon DB at 6:01 PM