Somalia: A Nation In Turmoil 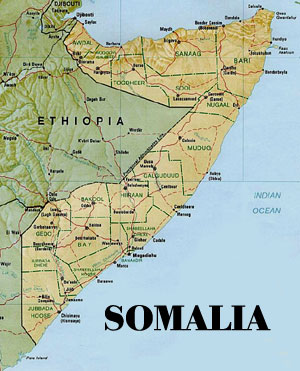 The African nation of Somalia has been in turmoil for as long as most can remember, with inept governments and general violence across the nation. While there is highly-publicized ongoing famine in Somalia, there needs to be an examination of how Somalia ended up in such turmoil.

General Siad Barre was made a colonel and deputy commandant of the  Somali National Army when Somalia became an independent nation in 1960. From there, he quickly rose in the ranks and came a major general in 1966. All this time he was loyal to the Somali government, however, things would change quiet soon. “On Oct. 21, 1969, shortly after the President, Dr. Abdirashid Ali Shermarke, was assassinated by a police officer in a factional quarrel, General Siad Barre led a successful and bloodless coup.” [1] Once in power, Barre aligned himself with the Soviet Union for a short while, until 1997, when he invaded “the disputed Ogaden area of southeastern Ethiopia” where he was soundly defeated due to “the help of Cuban troops and billions of dollars' worth of Soviet weapons” [2] that came into Ethiopia. Feeling betrayed by the Soviets, he turned to the US for aid.

In 1980, Barre “offered American rapid deployment forces access to its ports and air facilities in exchange for a significant commitment of military and economic assistance that was to last for a decade,” [3] thus for the next ten years, the US gave Somalia over $680 million. However, this aid may have very well been going to fund human rights violations, such as suppressing local populations in northern Somalia, placing “civilians under the jurisdiction of military tribunals and military police,” creating police units that “ensured loyalty to Siad Barre's regime by encouraging people to spy on each other in the work place, schools, mosques, and private homes,” [4] and suppressing any and all political dissent.

This blatant oppression and abuse of power led to the formation of groups that wanted a new government, specifically the United Somali Congress (led by interim president Ali Mahdi Mohamed) and the Somali National Movement (led by Gen. Mohamed Farah Aidid), made it a goal to overthrow Barre. In 1991 the two groups succeeded in overthrowing Barre, yet the nation became fractured as “internecine rivalry erupted between the rebel groups. The USC controlled the south, including Mogadishu, while the SNM controlled the north. In March of that year the north seceded to form the Republic of Somali- land.” [5] While it be a good thing that Barre was ousted, these two new groups were no better as in the ousting of Barre they had reduced Somalia to “an ash heap of charred buildings and burned-out vehicles, with decomposing bodies littering the streets” [6] and now they were fighting for control of Somalia, without a care for civilians.

Due to attacks on UN forces and militia members stealing food and supplies from UN ships, the United Task Force (UNITAF) was established in December 1992. The idea of UNITAF originated in the US. America, along with other forces from around the world were to

monitor the cease-fire in Mogadishu, the capital of Somalia, and to provide protection and security for United Nations personnel, equipment and supplies at the seaports and airports in Mogadishu and escort deliveries of humanitarian supplies from there to distribution centers in the city and its immediate environs. [7]

The very next year, the UN established United Nations Operation in Somalia 2 (UNOSOM2) in response to the attacks of militia members on UN forces. UNOSOM 2 was to eliminate those forces that had attacked the UN aid workers and “to establish the effective authority of UNOSOM II throughout Somalia, including [securing] the investigation of their actions and their arrest and detention for prosecution, trial and punishment.” [8]

While this entire intervention was presented as a way to help the people of Somalia, on the ground, Somalians themselves did not want outside intervention as the UN was massacring innocent people. UN forces were “accused of atrocities including killing of unarmed people, the bombing of a hospital, beating civilians and theft.” [9] The US and UN forces were actually hindering peace as the warlord Mohamed Farah Aidid “had actually initiated a process of bringing together civil and clan leaders to discuss processes for reconciliation.” The meeting between civil and clan leaders “sought to draft a peace agreement for the country's southern and central regions,” [10] yet this displeased the US because the UN hadn’t been invited.

While the US attempted to seem as if it cared about the Somalian people, in reality they cared only about two things: oil and military bases. In January 1993, a report “revealed that almost two-thirds of Somalia was allocated to the oil giants Conoco, Amoco, Chevron and Phillips by the pro-US dictator Mohamed Siad Barre.” [11] There was much collaboration between the oil companies and the US government as can be seen by the fact that before the US Marines landed in Somalia, the oil company Conoco allowed its headquarters in Mogadishu to be used as a temporary US embassy building. Conoco was quite worried that a pro-Western regime wouldn’t be put in power as their “tireless exploration efforts in north-central Somalia reportedly had yielded the most encouraging prospects just before Siad Barre's fall.” [12] If the new government ended up being nationalist, there would be little hope of any of the oil companies being able to continue their projects.

America was also interested in military bases as they would allow for the US to “be in a position to dominate the Persian Gulf and much of North Africa” as well as “be able to respond quickly to any Iraqi or Iranian threat.” [13] Dominating the Persian Gulf, the US would make sure that Middle East oil kept flowing and that the American and Western economies stayed afloat.

Despite its well laid plans, the UN failed in its mission to establish a government in Somalia, with all international forces pulling out by 1995. However, the goal to create a new Somalian government did not stop.

In 2002, Kenya organized a reconciliation process for the Somalian factions under the Intergovernmental Authority on Development, which ended in 2004 with the formation of a transitional federal government. While Somalia now had a government, there were problems, such as the clan dynamics in the Parliament. The seats of the transitional Parliament were divvied up in such a manner where “The four major clans—Darood, Hawiye, Dir, and Digil-Mirifle—all received sixty-one parliament seats, while the remaining groups together received thirty-one seats.” [14] While this was an attempt to even divide the seats, many smaller clans still felt left out. There was also the fact that leaders would try to minimize the influence of clans that opposed their agenda. In 2004, the first president of Somalia’s transitional government was Abdullahi Yusuf Ahmed, who chose as his prime minister “Ali Mohammed Gedi—a technocrat with no political muster, even within his own Hawiye clan” in “an attempt to marginalize the Hawiye” [15] who would have opposed Ahmed’s pro-Ethiopian foreign policy. These clan dynamics only served to make governing Somalia all the more difficult and made the transitional government completely ineffective.

This government incompetency led to the formation of the Somali Islamic Courts Union. They are an Islamist militia that, due to their fighting strength, pacified Mogadishu and much of southern Somalia. While the United States tried to portray them as Al-Qaeda affiliates, in reality, the Islamic Courts Union was a moderate group, “funded by the powerful business community to try and bring some law and order to a country without a government.” [16] The main reason the Islamic Court succeeded was due to the fact that they were supported by the local population and were working to create peace in the nation, rather than gain power and serve foreign interests. However, the rise of the Islamic Courts and other Islamist groups would provide a pretext for the United States to once again become involved in Somalia.

In 2006, Ethiopia invaded Somalia on the grounds that the Islamist groups in Somalia represented a potential threat to Ethiopia’s security. The US quickly backed the Ethiopian intervention as they wanted to capture of three al-Qaeda militants wanted for the bombings of U.S. embassies in Kenya and Tanzania in 1998 and a hotel in Kenya in 2002. (It is worthwhile to note that the Ethiopian military received military training from the US.) Also, the due to failing to install a new pro-Western government in the 90s, America saw this as another opportunity to install a pro-Western regime in Somalia as to get as the nearby oil reserves and lease military bases. The Americans supported the Ethiopian invasion so much that they even went so far as to conduct airstrikes [17] in support of Ethiopian forces.

However, the intervention failed as in late 2008, Ethiopian forces withdrew from Somalia. The intervention completely backfired as it actually empowered Islamist groups and put Somalia’s transitional government on the brink of collapse.

The overall problem that Somalia has is that it lacks an effective government and is constantly trying to be manipulated by the US to fulfill its own interests. If the world truly wants a stable Somalia, they will have to ally themselves with moderate groups such as the Islamic Courts Union to stabilize the nation and they will have to force the IMF to lay off Somalia, as they are a major cause of the current famine in the first place [18]. Only with political and economic stability will Somalia then be able to begin to build a competent government that can lead the nation into the future.