The Crisis In Mali: A Historical Background 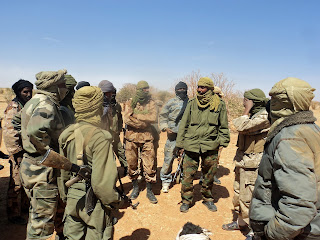 The following is an excerpt from an upcoming article on an in-depth examination of the ongoing crisis in Mali. The article below attempts to give some historical background to the current Tuareg rebellion and exactly who the Tuareg people are.


Currently the ongoing situation in Mali is gaining traction in the media with the reporting of Al Qaeda members within the ranks of the Tuareg rebels. The situation in quite complicated and involves not only France, but also the US and partially Canada and links to the interests of these Western powers with not just Mali, but with the African continent as a whole.

In order to get a better handle on the situation, there must first be an understanding of the domestic actors, namely the Tuareg people.

The Tuareg are a people that have lived in northern Mali “as early as the fifth century BCE” [1] according to Herodotus. After establishing the city of Timbuktu in the 11th century, the Tuareg “traded, traveled, and conquered throughout Saharan” over the next four centuries, eventually converting to Islam in the 14th century, which allowed them to “gained great wealth trading salt, gold, and black slaves.” [2] This independence was swept away when the French colonized Mali when they “defeated the Tuareg at Timbuktu and established borders and administrative districts to rule the area until Mali declared independence in 1960.”[3] The Tuareg people have consistently wanted self-independence and in pursuit of such goals have engaged in a number of rebellions.

The first was in 1916 when, in response to the French not giving the Tuareg their own autonomous zone (called Azawad) as was promised, they revolted. The French violently quelled the revolt and “subsequently confiscated important grazing lands while using Tuaregs as forced conscripts and labor - and fragmented Tuareg societies through the drawing of arbitrary boundaries between Soudan (Mali) and its neighbors.”[4] Yet, this did not end the Tuareg goal of an independent, sovereign state. Once the French had ceded Mali independence, the Tuareg began to push toward their dream of establishing Azawad once again with “several prominent Tuareg leaders [lobbying] for a separate Tuareg homeland consisting of northern Mali and parts of modern day Algeria, Niger, Mauritania. […] [However,] black politicians like Modibo Keita, Mali’s first President, made it clear that independent Mali would not cede its northern territories." [5]

In the 1960s, while the independence movements in Africa were beginning, the Tuareg once again vied for their own autonomy, known as the Afellaga rebellion. The Tuareg were greatly oppressed by the government of Modibo Keita, which came into power after the French had left, as they “were singled out for particular discrimination, and were more neglected than others in the distribution of state benefits,” which may have been due to the fact that “most of the senior leadership of post-colonial Mali were drawn from the southern ethnic groups who were not sympathetic to the pastoral culture of the northern desert nomads.” [6]

In addition to this, the Tuareg felt that the government’s policy of ‘modernization’ was in reality an attack on the Tuareg themselves as the Keita government enacted policies such as “land reform that threatened [the Tuareg’s] privileged access to agricultural products.” [7] Specifically, Keita “had moved increasingly in the direction of [establishing a version of] the Soviet collective farm and had created state corporations to monopolize the purchase of basic crops.” [8] In addition to this, Keita left customary land rights unchanged “except when the state needed land for industry or transport. Then the Minister of Rural Economy issued a decree of acquisition and registration in the name of the state, but only after publication of notice and a hearing to determine customary claims.” [9] Unfortunately for the Tuareg, this unchanging of customary land rights did not apply to the subsoil that was on their land. Instead, this subsoil was turned into a state monopoly due to Keita’s desire to ensure that no one became a capitalist based on the discovery of subsoil resources.

This had a major negative impact on the Tuareg as they had a pastoral culture and the subsoil helps to “determine what kind of crops can be grown in any area and, therefore, what livestock can be raised.” [10] Thus, by creating a state monopoly on subsoil, the Keita government was effectively in control of what the Tuareg would be able to grow and therefore in control of their very lives.

This oppression eventually boiled over and became the first Tuareg rebellion, which began with small hit-and-run attacks on government forces. However, it was quickly crushed due to the Tuareg lacking “a unified leadership, a well-coordinated strategy or clear evidence of a coherent strategic vision.” [11] In addition to this, the rebels were unable to mobilize the entire Tuareg community.

well-motivated and [well-equipped] with new Soviet weapons, conducted vigorous counterinsurgency operations. By the end of 1964, the government’s strong arm methods had crushed the rebellion. It then placed the Tuareg-populated northern regions under a repressive military administration. [12]

Yet while the Malian military may have won the battle, they failed to win the war as their heavy-handed tactics only alienated Tuareg who didn’t support the insurgency and not only did the government fail to follow through on promises to improve the local infrastructure and increase economic opportunity. To avoid the military occupation of their communities and also due to massive drought in the 1980s, many Tuareg fled to nearby countries such as Algeria, Mauritania, and Libya. Thus, the grievances of the Tuareg went unaddressed, only creating a situation in which a rebellion would once again occur.

The raging inferno that was the spirit of independence of the Tuareg people once again came back to life in 1990. It must be noted that Tuareg had greatly changed since the 1960s and moved from a socialist government to a military dictatorship that (due to massive pressure from the people) quickly changed to a transitional government with military and civilian leaders, finally fully becoming democratic in 1992. [13]

While Mali was transitioning to a democracy, the Tuareg people were still suffering under the boot of oppression. Three decades after the first rebellion, the occupation of Tuareg communities still had not ended and “resentment fueled by the harsh repression, continued dissatisfaction with government policies, and perceived exclusion from political power led various Tuareg and Arab groups to begin a second rebellion against the Malian government.” [14] The second rebellion was sparked due to “attacks on non-Tuareg Malians [at] the southernmost edge of the Tuareg regions [which led to] skirmishes between the Malian army and Tuareg rebels.” [15]

Yet it did not last long as the first major step to peace was made in 1991 by the transitional government and resulted in the Tamanrasset Accords, which was negotiated in Algeria between the military government of  Lt. Colonel Amadou Toumani Touré (that had taken power in a coup on March 26, 1991) and the two major Tuareg factions, The Azaouad Popular Movement and the Arabic Islamic Front of Azawad, on January 6, 1991. In the Accords, the Malian military agreed to “disengage from the running of the civil administration and will proceed to the suppression of certain military posts,” “avoid zones of pasture land and densely populated zones,” to be “confined to their role of defense of the integrity of the territory at the frontiers,” [16] and created a ceasefire between the two main Tuareg factions and the government.

However, not all of the Tuareg factions signed onto the Accords as many rebel groups demanded “among other concessions, the removal of current administrators in the north and their replacement with local representatives.” [17] The Accords represented a political compromise in which more autonomy was granted to Tuareg communities and local and regional councils made up of local representatives were established, yet the Tuareg still remained a part of Mali. Thus, the Accords were not the end all be all of the situation as tensions remained between the Tuareg and the Malian government.

The transitionary government of Mali attempted to negotiate with the Tuareg. This culminated in the April 1992 National Pact between the Malian government and several Tuareg factions. The National Pact allowed for “integration of Tuareg combatants into the Malian armed forces, demilitarization of the north, economic integration of northern populations, and a more detailed special administrative structure for the three northern regions.” [18] After Alpha Konaré was elected president of Mali in 1992, he furthered the process of Tuareg autonomy by not only honoring the concessions made in the National Pact but by removing the structure of federal and regional governments and allowing authority to take hold at the local level. Yet, decentralization had a greater political purpose, as it “effectively co-opted the Tuareg by allowing them a degree of autonomy and the benefits of remaining in the Republic.” [19]

However, this attempt to deal with the Tuareg did not hold as the National Pact only renewed debate about the unique status of Tuareg people and some rebel groups, such as the Arabic Islamic Front of Azawad, did not attend the National Pact talks [20] and the violence continued, eventually resulting in the deaths of 6,000-8,000 people before an peace agreement was signed by all factions.

It must be noted that the introduction the Arabic Islamic Front of Azawad to the Tuareg rebellion is also the introduction of radical Islam to the Tuareg fight for independence. The emergence of radical Islam was greatly aided by the Gaddafi regime. During the 1970s many Tuareg had fled to Libya and other countries, mainly for economic opportunity. Once there, Gaddafi “welcomed them with open arms. He gave them food and shelter. He called them brothers. He also started training them as soldiers.” [21] Gaddafi then used these soldiers to found the Islamic Legion in 1972. The goal of the Legion was to “further [Gaddafi’s own] territorial ambitions in the African interior and advance the cause of Arab supremacy.” [22] The Legion was sent to fight the in Niger, Mali, Palestine, Lebanon, and Afghanistan. However, the Legion came to an end due to the price of oil declining in 1985, which meant that Gaddafi could no longer afford to recruit and train fighters. Coupled with the Legion’s crushing defeat in Chad, the organization was disbanded which left many Tuareg going back to their homes in Mali with large amounts of combat experience. The role of Libya played a role not only in the third Tuareg rebellion, but also in the current, ongoing fighting. [23]

The third rebellion was not so much a rebellion, but rather an insurgency that kidnapped and killed members of the Malian military.

The insurgency began in May 2006, when “a group of Tuareg army deserters attacked military barracks in Kidal region, seizing weapons and demanding greater autonomy and development assistance.” [24] The former general Amadou Toumani Toure had won presidential elections in 2002 and reacted to the violence by working with a rebel coalition known as the Democratic Alliance for Change to establish a peace agreement that solely restated that Malian government’s commitment to improving the economy in the northern areas where the rebels lived. However, many rebels such as Ibrahim Ag Bahanga, who was killed just last year, [25] refused to abide by the peace treaty and continued to terrorize the Malian military until the government of Mali deployed a large offensive force to eliminate the insurgency. [26]

Yet, the fight for Tuareg independence remains and leads us into the current, ongoing rebellion.