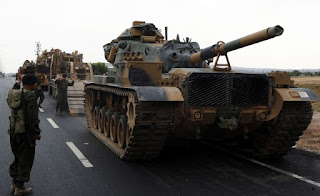 It has been reported recently that Turkey is firing artillery shells into northern Syria due to a mortar attack. The situation is quite tense and could potentially lead the way for a Turkish intervention into Syria.

On October 3rd, the BBC reported that “Turkey has renewed firing at targets inside Syria after two women and three children were killed by shelling from across the border on Wednesday.”[1] This was quickly reported in the media with people immediately blaming the Assad government. However, the New York Times noted that “It was unknown whether the mortar shells were fired by Syrian government forces or rebels fighting to topple the government of President Bashar al-Assad. The Turkish response seemed to assume that the Syrian government was responsible.”[2] (emphasis added) Thus, no one actually seems to know exactly who fired the mortars. The situation is quite murky as Turkey has actively been aiding the rebels[3], however, the Assad regime has been so busy battling the rebels that it is doubtful if they would have time to go and attack Turkey much less the interest to do such a thing.

There is definitely a response to [the attack] in international law. Turkey is a NATO member. Certain NATO treaty articles bring about certain responsibilities when one of its members is attacked. We are not blinded by rage, but we will protect our rights to the end in the face of such an attack on our soil that killed our people.[4] (emphasis added)

The Turks seem to want intervention as the BBC reported that “The Turkish parliament is discussing authorising troops to cross into Syria. But government sources say Turkey is not planning to declare war on Syria”[5] and in late September,

Turkey's Foreign Minister Ahmet Davutoglu called again for the establishment of safe zones for refugees in northern Syria - which would take a considerable military operation.
Mr Davutoglu would not be drawn on the fact that inserting a military force into Syria to establish a safe zone would be an act of war.[6] (emphasis added)

However, this brings up question: Why would Turkey even want to intervene into Syria? Taking out Assad would allow for Turkey to “establish [its] credentials as the new power of the Middle East” and “allow it to reshape to its satisfaction a neighbour whose rebellious Kurds are a source of constant concern to its own security.”[7] It must also be realized that if an intervention does occur and Turkey/NATO wins, then it will pave the road for a war with Iran, as Iran’s main ally will be out of the picture.

Yet, Turkey may not even have to consult with NATO- or anyone for that matter- about intervening in Syria as a legal path for intervention may already be available. According to the Adana Agreement, signed between Turkey and Syria on October 20, 1998, “Turkey has the ability to classify the violent crackdown on the opposition by the Bashar al-Assad government and the ensuing refugee crisis as a threat to the ‘security and stability of Turkey.’”[8] Thus, the Turkish government could use this provision of the Adana Agreement in conjunction with the recent mortar attack and claim that ongoing situation is threatening the “security and stability of Turkey” and begin sending military units into Syria.

The clock is ticking and only time will tell whether the intervention will take place.