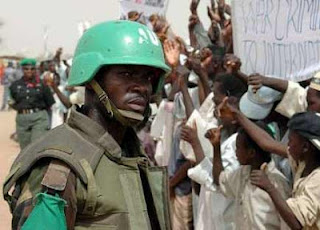 The UN Security Council is now “examining whether a green helmet force should intervene in conflicts caused by rising seas levels and shrinking resources” [1] and climate change in general. This, coupled with UN Secretary-General Ban Ki-Moon’s statement that the goal of his second term was to encourage “global development that reduces poverty but preserves the environment for future generations,” [2] raises the question of what would occur if the UN did in fact establish a climate change peacekeeping force and if the UN is overstepping its boundaries.

The UN does have an argument that climate change is going to affect the world. In 2009, Mr. Ki-Moon “identified sea-level rise as the ‘ultimate security threat’ for some small island states, with some possibly set to disappear over the next 30 years’” which could lead to “disputes over maritime territories and access to exclusive economic zones.” [3] This could have far-reaching effects as

Uncoordinated strategies aiming to cope with forced migration as a consequence of sea-level rise may create social and political tensions, which may derail efforts in peacebuilding and post-conflict stabilization – and thus become a threat to international peace and security. [4]

President of Nauru (see this, this and this, for information on Nauru), Marcus Stephen, stated that due to the rise in sea levels in recent years “Nauru’s coast, the only habitable area, is steadily eroding, and communities in Papua New Guinea and the Solomon Islands have been forced to flee their homes to escape record tides.” [6] While large nations may not seem to care, they should be worried as it has generally been predicted that climate change could lead to general strife in countries and that it could potentially have wide-reaching effects and force its neighbors to intervene.

There is also debate over whether the UN is overstepping its boundaries. For example, some speculate the UN troops could end up on US soil, stating the that UN intervening in climate change

would give [them] justification to place a "peacekeeping" force on U.S. soil, of course. Virtually the entire U.S. Southeast -- from Texas all the way to D.C. -- is currently sweltering under a severe heat wave combined with a hundred-year drought in many areas. Under the UN's new "climate change peacekeeping" initiatives, if crop failures result in riots, they could drop in a few hundred thousand UN troops -- all wearing GREEN helmets -- and then explain they're here to save us from "conflicts caused by shrinking resources. [7]


However, others argue that it won’t do much harm as “UN blue-helmeted peacekeepers are pretty much helpless wherever they are deployed so you might ask will changing the color of their helmets alter that reality?” [8]

Overall, it is the UN that will have to answer the question of whether or not they want to intervene in the problems that are caused by climate change. However, there is another option besides the UN green helmets and that is to take a stand against climate change, to begin implementing policies that will help us deal with it in the short-term and create a greener way of life in the long-term.